The arrival of the first serious snowfall this winter coincided with the Mixed 40+ training row.  Hardy skiffers or just plain daft?  Either way, it looks like they had fun.  Photographs by Michael MacDonald.

As a reminder of warmer days, also included is a photograph of Lesley and Craig’s wedding from May 2014 – the first UCRC wedding.

The passengers and crew of cruise ship, CSV Albatross, were delighted by their visit to Ullapool, describing it as a beautiful place, full of fresh air and sunshine.

Mike and John in a pre-race cox discussion.

A warm welcome, changeable weather, and a day of mixed results lay in store for the Club at Shieldaig.

With over twenty members of the Club participating in the Regatta we were able to enter two boats in each of the five round-the-island races.  Special mentions must go to Donna who arrived as a supporter but ended up stepping in at at the last minute for the Women’s Mixed Age race, and to our two coxes – John and Mike – who were out for every race.

Tim gets on his race-face while Tom buckles up and Topher strides out before the Men’s Mixed Age race.

Although Coigach won overall, Ullapool’s Mixed 50+ team won the Race of the Day.  Cox, John McIntyre kept a cool head in a fiercely-fought race, during which Coigach’s skiff ran aground.  Lashed by torrential rain, Cul Mor raced to the finish with the Ulla team coming in a very respectable second.  Hats off to the Coigach team for showing great spirit by finishing the course once they had been pulled from the rocks.

The winning Cul Mor team, comprising Kathryn, John, Ian, Lorraine, and John (cox), was awarded a smart silver trophy and a cash prize of £100 which was donated to Club funds.

A plentiful supply of tea, coffee and cake at the village hall kept everyone going, while the much remarked upon bacon and scallop rolls went down a storm.

Clan Chief, Ruaridh MacLennan piping the rowers through the finishing line was a lovely touch.

Paul enjoying the racing as the storm clouds gather.

PS Well done to Tom Grant for winning £20 in the hill race while we were there.

The following photographs of the day were taken by Robbie McFedries.

Fiona in the umpire tent.

Action shot of Tim handing a baton to Mike.

Jan and Kate in the registration tent.

Getting organised for the 40+ Men medal winners.

Under 19 Boys bronze medal winners, with Sheila trying to stay out of the photograph.

Jonathan commentating from the beach.

Cheryl the masseuse with Jo and Lisa.

Mixed decades men pulling Cul Mor out of the water.

Kathleen and Bev at the merchandise stall.

Lisa and Mike in the registration tent.

The great Ullapool CRC tradition of hauling the rope for the start line.

Kate and Anne from the 60+ Women team with cox Mike.

Topher in the umpire tent.

Kate hard at work in the registration tent.

A big thank you from Ullapool Coastal Rowing Club to everyone who took part in and supported our 2015 Regatta.  You made it a memorable and enjoyable weekend.

The racing was top notch, and with several close finishes excitement levels were sky high. The 50+ Men and 60+ Men categories were particularly tight, with only one second separating first and second place in each race.

More news and photographs of the Regatta will follow, in the meantime full results for all races are listed below.

Before the results, a word from Topher…

Coigach did very well and their junior teams are fantastic. We did well to take the Open Men, 60+ Men (ahem!), and the 50+ Men, and did well in the medals. I’d like to thank all the club members for all their efforts, the Harbour Trust for their generous sponsorship of the marquee, and Robert Hicks for the entertainment.
Cheers, Topher.
Ullapool Coastal Rowing Club

Posted: July 6, 2015 | Author: LG Thomson | Filed under: Scottish Coastal Rowing | Leave a comment
The Club’s results at Portsoy Regatta were as mixed as the weather.  There were penalties, gold medals, and at least one tent collapsed under Saturday’s deluge.  We may have been wet, we may have been cold, we may even have been a teeny, tiny bit disappointed by some of the results, but guys, it was worth it for what surely must be the skiffie shot of the season.

There was an excellent snapshot of the Club in the Mixed Decade team of Tom, Jan, Anne and William.  There were highs and lows.  A big learning curve.

Brilliant sunshine and pouring rain.  Brilliant row from the young men rowing Cul Mor in the Open Men, sadly lost due to a 40 second penalty for being over the start line.  Great row by the older men in a borrowed boat which actually won the Open Men. Excellent rows from the other crews despite big waves! Ice cream and fish and chips up to the usual high standard.
Topher Dawson

A mixed day.  Good – our over 40 men getting a medal in a borrowed boat.  Got dizzy doing 360 degree turns at the umpires behest!  Not so much a learning curve, more a vertical challenge.  Everyone rowed their socks off.  Congrats to you all.
Ron Smith, cox.

Despite lots of lousy rain and standing around, everyone gave their all rowing and coxing their hearts out, making a long days racing worthwhile whilst showing promising signs of improving form for our own regatta next weekend.
Erica Alexander

Kate Macphail, much-loved member of Ullapool Coastal Rowing Club, passed away on the 29th of May 2015.  Her skiffie friends marked their respect and affection for Kate by turning out for her funeral in club shirts.  Social rows with Kate were very social affairs indeed, with laughter being the order of the day.  She was full of joie de vivre, and will be missed by us all.

The following eulogy was written by Sue Agnew and Fiona MacDonald, and read by Sue at Kate’s funeral.

Kate Macphail – our rower and friend.  The first thing that comes to mind about Kate was her unmistakeable and hugely infectious laugh.  You couldn’t help but smile and laugh along with her.  That was, I think, one of her most attractive qualities; always cheery and she made others feel the same, no matter what kind of day you might be having.

And that’s how Kate was with us all when she joined the rowing club.  She immediately became one of our stalwarts.  I remember the first day she turned up to row, looking stylish and elegant as only Kate could in those red neoprene trousers.  She needed them, as she would turn out to fill a boat space in some of our more inclement Ullapool weather. And she brought to that boat, good humour and laughter with every crew she rowed with, which was a great asset to have.

Maybe the competitive racing was not quite to her liking, but the social craic with a crew of ladies or mixed members certainly was.  And she quickly became one of the great “do-ers” within the rowing circle.

She volunteered to help in all our fundraisers, maintaining she couldn’t bake, and that Nigel would make the soup, but nevertheless arrived, hat on, full of enthusiasm, rolled up her sleeves and got on with the job.

And we did a huge amount of this fundraising leading up to the 2013 World Championships.  Kate was involved in all of it.  She stepped in to take on the job of minute secretary for the Worlds organising committee and helped steer and support us through a major event in our community.  She offered many words of wisdom, her sharp mind interested in what was going on.  Her direct manner, which kept us on our toes, was Kate through and through.

The title of Soup Dragon was bestowed upon her with some trepidation when she and Helen gallantly took on the task of providing copious amounts of hot soup at the World Championships and subsequent Regattas.  But she took it with great spirit, hopefully recognising this title was bestowed with our admiration on a lady who was generous and giving, and who was our friend.

Her leaving us has left a big hole in our small rowing community.  It was a pleasure to have known her and to have rowed and laughed with her.  We will lift a glass of Guinness to her at our next rowing Regatta.

Summer has finally arrived (for now…) and regatta season is suddenly in full swing.

On Saturday 27 June, twelve members from Ullapool travelled over to the east coast for the Bunillidh Regatta.

The following snapshot of the day’s events comes courtesy of Anne Smith.  Photograph by Erica Alexander.

A warm sunny day greeted us at Helmsdale, the prelude to a well organised day of racing. The twelve club members who travelled there managed – with Topher’s guidance- to mix and match enough teams to contest all but two of the day’s races.

We got podium positions in several of the events and everyone rowed their socks off.

This bodes well for the coming weekend weekend at Portsoy. 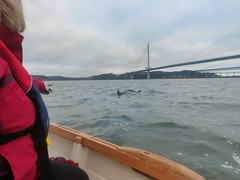